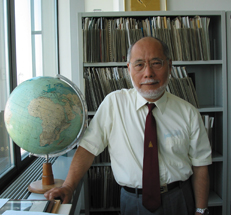 Atsumu Ohmura for more than fifty years carried out research on Arctic climate and glaciology. His main contributions are the characterization of the Arctic climate, based on the conservation principle of energy. For this purpose, he has observed and computed energy exchanges on a number of Arctic surfaces. The application of these methods for glaciers laid the theoretical foundation for the classic P/T diagram originally proposed by Hans W. Ahlmann, a hundred years ago. In the course of his energy balance investigations, Dr. Ohmura discovered the Missing Absorption of solar radiation in the atmosphere, and Global Dimming, both of which are significant at the planetary level. To pursue the theoretical development of climate genesis, Dr. Ohmura initiated two major experimental/data projects of the WCRP, the Global Energy Balance Archive (GEBA) and the Baseline Surface Radiation Network (BSRN), which form the basis of the present climate modelling. Dr. Ohmura served as the president of the International Glaciological Society in the mid-2000s. He was the Swiss delegate for United Nations COP-3 which passed the Kyoto Protocol to mitigate the greenhouse induced climate change. Throughout his career, he has supported young scientists especially in the field of polar science and glaciology. Many of the forty-seven young scientists whom he supervised during their doctoral works are presently working on the frontline of polar science.