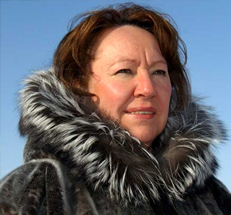 Sheila Watt-Cloutier resided in Iqaluit, Nunavut for 15 years and now has returned back in her hometown of Kuujjuaq, Quebec. She was born in Kuujjuaq, Nunavik (northern Quebec), and was raised traditionally in her early years before attending school in southern Canada and in Churchill, Manitoba. She is the past Chair of Inuit Circumpolar Council (ICC), the organization that represents internationally the 155,000 Inuit of Canada, Greenland, Alaska, and Chukotka in the Far East of the Federation of Russia.

Dealing with youth issues holistically is important for Ms. Watt-Cloutier. She contributed significantly to "Silatunirmut: The Pathway to Wisdom," the 1992 report of the review of educational programming in Nunavik, and she co-wrote, produced and co-directed the youth awareness video "Capturing Spirit: The Inuit Journey."

Ms. Watt-Cloutier was an elected political spokesperson for Inuit for over a decade. From 1995 to 1998, she was Corporate Secretary of Makivik Corporation, set-up under the 1975 James Bay and Northern Quebec Land Claims Agreement. Defending the rights of Inuit has been at the forefront of Ms. Watt-Cloutiers mandate since her election as President of ICC Canada in 1995 and reelection in 1998. Ms. Watt-Cloutier was instrumental as a spokesperson for a coalition of northern Indigenous Peoples in the global negotiations that led to the 2001 Stockholm Convention banning the generation and use of persistent organic pollutants (POPs) that contaminate the arctic food web. In 2002, Ms. Watt-Cloutier was elected international Chair of ICC.

During the past several years, Ms. Watt-Cloutier has alerted the world that Inuit will not become a footnote to the onslaught of globalization by working through the Inter-American Commission on Human Rights to defend Inuit human rights against the impacts of climate change. On December 7, 2005, she filed a climate change-related petition with to the Commission as an urgent message from the Inuit sentinels to the rest of the world on global warmings already dangerous impacts. On March 1, 2007, she testified before the Commission during their extraordinary first hearing on the links between climate change and human rights.

On behalf of ICC Canada, Ms. Watt-Cloutier received the inaugural Global Environment Award from the World Association of Non-Governmental Organizations in recognition for her POPs work. She is the recipient of the 2004 Aboriginal Achievement Award for Environment. In 2005, she was honored with the United Nations Champion of the Earth Award and the Sophie prize in Norway. Later in the year, she was presented with the inaugural Northern Medal by the outgoing Governor General of Canada, Adrienne Clarkson.

In February, 2007, she was publicly nominated for the Nobel Peace Prize by members of the Norwegian parliament, including the former Minister of the Environment. Also in Norway, she received the Rachel Carson Prize in June, 2007. Later that month at the U.N. Human Development Awards in New York, Secretary General Ban Ki Moon presented Sheila with the 2007 Mahbub ul Haq Human Development Award. In April 2008, the Public Policy Forum honored her with a Testimonial Award at its 21st Annual Testimonial Award Dinner in Toronto, Canada.

She has served as a mentor for two Trudeau Foundation Scholars pursuing their Ph.D.s. She remains connected to her lifes work through advocacy work, which included membership as Commissioner on the civil society Commission on Arctic Climate Change led by the Aspen Institute. She has taught the Human Dimension of Climate Change both at Bowdoin College, Maine USA and at Mount Allison University in Sackville, NB. She remains busy with speaking engagements and a book tour promoting her recently launched book The Right To Be Cold which hit major bookstores in March of 2015. Her book was shortlisted for the British Columbia Canadian Non-Fiction Award, The Cohen Shaughnessy for Political writing, the Cobo Emerging Writer Prize and the CBC Canada Reads competition.

In November 2015, she was one of four Laureates awarded the Right Livelihood Award considered the Alternate Nobel Peace Prize which was presented in the Parliament of Sweden.

In 2017 she received the Climate Change Award from the Prince Albert of Monaco Foundation.

Ms. Watt-Cloutier sums up her work by saying: I do nothing more than remind the world that the Arctic is not a barren land devoid of life but a rich and majestic land that has supported our resilient culture for millennia. Even though small in number and living far from the corridors of power, it appears that the wisdom of the land strikes a universal chord on a planet where many are searching for sustainability.